Artist Profile on Kate Bingaman-Burt: Turning An Obsession Into Art

Kate Bingaman-Burt is obsessive. No, really. She has been making visual work about personal consumption since 2001, relentlessly documenting and illustrating credit card statements, the objects she purchases, and peripheries of consumer culture like free boxes and garage sales. Since 2006, she has been making one drawing every day of something she purchases.

Though Kate has been making work about consumption for more than a decade, she feels like she is just getting started. “It really doesn’t feel like that long,” she said. In February, she hung a retrospective of her work at the Huntington Museum of Art in West Virginia, and when the show came down, her piles of drawings and ephemera filled 18 boxes. “When I started unpacking the boxes, all I could think was...this is it? I know it may sound like a lot, but it really still feels like I’m at the beginning of this project.”

Over the years, Kate’s practice has grown to include projects that engage audiences and inspire creativity. Her “What Did I Buy Today?” journal invites the user to document their own daily purchases. “Sometimes at art shows or workshops I have people draw the things they have purchased that day, or the things in their wallet,” Kate said. “This journal is another way to get people making and thinking about the everyday objects in their lives.”

“This is another way to get people making and thinking about the everyday objects in their lives.”

In 2010, Kate co-curated an exhibition that also aimed to get people thinking about the importance of common objects. Co-curated with her husband Clifton Burt, the show was called Collateral Matters and shown at the Museum of Contemporary Craft. They sifted through piles of communication ephemera from the museum’s archives and presented a curated showcase of graphic design from the last 50 years in the form of postcards, show fliers, letterhead and more. Kate and Clifton selected some of their favorite pieces of paper and created a set of nine postcards.

Kate makes drawings and products as part of her own art practice, and she also makes illustrations for many different clients.

A recent collaboration with hilarious stationer Knock Knock yielded more interactive note-taking tools like the Shit List, To Do list, and “All Out Of” grocery list, each one hand-lettered by Kate. These funny lists are something Kate needs herself: “I am rather dumb when it comes to lists,” she said. “I have Post-It notes all over my desk, and then I have TODAY lists, and lists on my computer, but they are all a little different. Together they make a SUPER list.” Hear that Knock Knock? “Super List” might be your next Kate Bingaman Burt collaboration...

Kate’s iconic diamond line-drawings were transformed into temporary tattoos by Brooklyn-based Tattly. Cool fact: she has these same diamonds actually tattooed on her arm. “I love anything that is ridiculously meta, and people having temporary tattoos of my real tattoo falls right into that category,” she said. Tattly even caught a photo of Richard Simmons sporting Kate’s diamond tattoo. “Seriously, there are only a handful of celebrities that I would want to see interacting with my work, and he is one of them,” she said. “Richard Simmons, John Waters. And maybe Peewee Herman.” 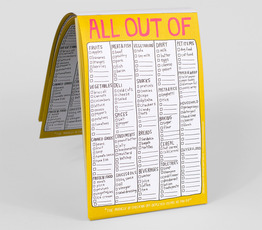 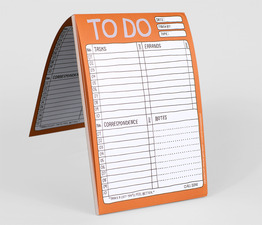 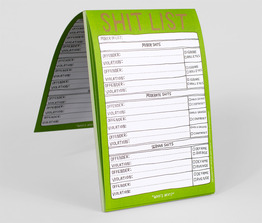